Apollo valves company was created when two Detroit based manufacturers of brass valves and fittings merged in 1928. The company now known as Apollo valves earned a reputation for developing new products to meet emerging market demands.  Their product Apollo Series 70 ball valve was introduced to the commercial market in 1968.  This product became the most specialised ball valve in the world and is now created in a varying range of sizes, materials and applications.

In 2005 the company bought all of its products under the Apollo valves brand.  This includes plumbing and heating products, water gauges, pop safety and relief valves, marine fittings and backflow prevention devices.

Most of the Apollo valves are manufactured in the United States with the headquarters located in Matthews, N.C.

Apollo Atmospheric  Vacuum is available in three models ranging in size from quarter inch to 2 inch.  The three available series include, 38-100 Series, 38-200 series and 38LF-100 Series.

Apollo Double Check Detector assemblies comes in five different series and is available in stainless steel in the smaller sizes and ductile iron in the larger sizes of the Apollo double check detector assemblies.  These backflow prevention devices are testable to ensure correct workings throughout the life of the valve which range in sizes from half inch to 12 inchs and included in the range of Apollo backflow prevention valves series is 4A-600 / 4ALF-600 Slo Cloz Series, 4ALF-600 LBF Series, 4S-600 Series, 4ANLF-600 LBF Series and 4SG-600 Series. The now discontinued values include 4A-600 LBF series and 4AN-600 LBF Series.

Dual checks have six different options within the series and are a non testable device which only has a low hazard rating.  They are available from 3/8 inch to 1 ¼ inch constructed from a bronze body.  Apollo Backflow prevention devices in this series are 40-300 Series, 40LF-300 Series, 4ALF-300 Series, 4FP-300 Series, 4N-300 Series and 4NLF-300 Series.

Dual check with Atmospheric port backflow prevention series has a range of three valves these are a non testable device only suitable for low hazard rating installation.  Available in a size from quarter to three quarter.  These also have a carbonated beverage dual check in the range.  The Dual check with atmospheric port include the series 38-500 series, 4A-400 Series and 4C-100 Series.

Pressure and Vacuum breaker have two valves available and one discontinued valve within the series.  All valves include ball valves in the assembly.  Available in sizes from ¼ inch to 2 inch.  The Apollo pressure vacuums 4W-500 Series and PVB 4A/ PVBLF 4A series.  The discontinued series is the 4V-500 Series.

Hose Bib Vacuum Breaker is designed to fit onto the end of a standard garden hose tap designed as an individual zoned protection.  These are a non testable device with a low hazard rating designed mostly for domestic purposes.  Available in ¾ inch size with either chrome plated or brass.  The two series include 38-300 series and 38-400 series. 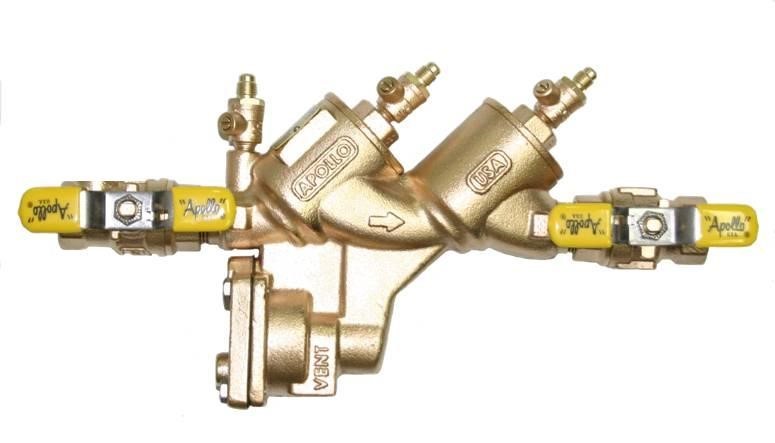